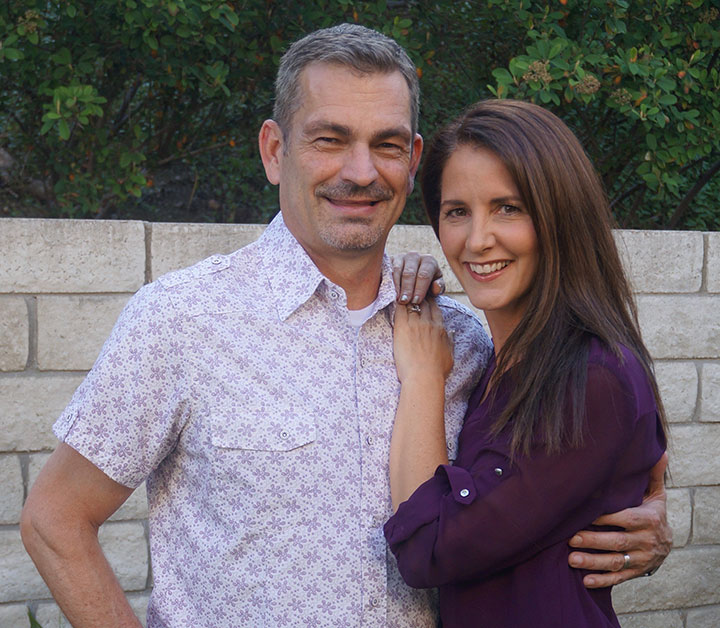 Johnny and Elizabeth have been married for 26 years, live in California, and have four daughters: Promise, Justice, Grace, and Glory. They’ve also recently informally adopted an adult son, Enric Sifa and his lovely bride, Whitney, who live in Oregon. Both Johnny and Elizabeth come from a rich spiritual heritage and were raised in Christian homes. Johnny was born and raised in Peru, South America where his parents were missionaries for over 50 years. Elizabeth was born in Birmingham, Alabama and lived most of her life in Atlanta. Before Johnny and Elizabeth married, he promised her that there were two things they would never do- be missionaries or pastors. Of course they ended up not only traveling all over the world speaking in churches, but started and pastored a church in Atlanta for over 14 years.

In their early years of taking their friends and family on short term mission trips, Johnny and Elizabeth saw God use very ordinary people like themselves to heal many people- body, mind, and spirit. But a frustration surfaced in Johnny that caused him to begin asking God questions about the cities and nations they were investing their time in. Even while they witnessed countless salvations and supernatural healing, nothing seemed to change in the overall culture, which was often the reason so many needed miracles to begin with. The more Johnny sought God’s heart, the more God showed him how much He cares, not only about people, but about everything that affects us. He discovered that the same God who wants to heal our bodies, minds, and spirits also desires to heal our cities and nations through the very culture around us. He began to understand that no matter where we live, the primary areas of every nation’s culture (Government, Media, Religion, Family, Education, Economy, Arts & Entertainment) help shape what we believe about ourselves and about God.

From those times of questioning came years of teaching that is compiled in Johnny’s first three books,Who Me?!, The Seven Mountain Prophecy, and The Seven Mountain Mantle. The more he studied, wrote, and taught about the need to transform culture, the more he and Elizabeth realized their role in awakening not only Christians to this new way of thinking, but also helping those who may not feel close to God change their perspective of who they think He is and His true heart towards them. Johnny and Elizabeth’s newest book Rainbow God: The Seven Colors of Love is an expression of the discovery of God as Love, and all the ways He desires to show up in culture through those who are willing to believe that He cares and has the best way of solving our present problems in all areas of culture. They are especially excited about two new books by Johnny that will be published in 2015: Becoming a Superhero: A Pocket Guide to a Life Like David and The Seven Mountain Renaissance: Vision and Strategy Through 2050.

They have recently relocated from Atlanta to Los Angeles in order to position themselves and their family for mentoring and impacting those with influence in the seven mountains. Some have asked “Why California?” The reality is, for good or bad, California is the leading state globally in all areas of culture, therefore they felt it was important to obey God’s direction for them and geographically align themselves with the front edge of the exciting things God is doing there, now and in the coming years. Many have little hope for this state because of the negative influence they see coming out of Hollywood, but the Enlows have clearly seen otherwise. Johnny and Elizabeth know that it’s more critical than ever to release a hopeful prophetic perspective from the West coast, and consider it a privilege to align themselves with those who are contending for reformation here.

Perhaps their vision and purpose can best be summed up in this way…to communicate in every way possible the profound yet simple reason we’re all here…to know the real God, to make the real God known, and to learn to love and be loved.

To learn more about them and their ministry, check out their website JohnnyandElizabeth.com